What’s a good way to create a recognition program?

What can you do?

Hello, and welcome to today's EMS leadership Academy, Q and A. I'm Lisa Giruzzi. I'm here with Robbie MacCue and we are the co-founders of the EMS leadership Academy. And for those of you that don't know, we help EMS leaders bring out the best in themselves and others. Yeah. And today's question is what's a good way to create a recognition program.

And I think this is a really interesting question because when people want to start a recognition program, it's usually from a really good place of wanting to acknowledge people and wanting people to feel good, but it often is also seen as a way to, I don't know, motivate people or to, you know, try to increase morale. And it really is not surprisingly,

the recognition program needs to be part of a larger initiative you could say, or, or part of a larger system of creating a way for people to feel valued. In other words, it needs to be the result of a great culture, not a stepping stone towards creating a great culture. And I know that's counterintuitive to people, but if you, if you just try to do a recognition program without the other things that are part of a,

of a healthy culture, it it's like putting a bandaid on a hemorrhage. You know, it just it's insufficient and people will often feel manipulative or manipulated or, you know, feel like new, just trying to butter me up. What about, you know, what about this thing? I don't need a plaque on a wall. I need to be felt cared for it.

You know? So my recommendation for people is to start with recognizing that acknowledgement is not about somebody's ego or stroking people's ego. It's really for people to feel like they're making a difference in the world and let's face it. People in prehospital care are doing so because they care about the world. You know, they care. They want to make a difference that they're not doing it for the money.

That's for sure that, you know, the accolades, but it's, it is to acknowledge people that they're making a difference that they matter. And so when you come from that space, then you can do a survey, maybe of people, whether formal or informal asking people like, you know, what would have them feel valued? What would have them feel like they're making a difference?

How do they want to be acknowledged? And I would only do that survey if you are prepared to respond, if you're either prepared to do what people are suggesting or in some way, communicate with people so that they feel heard, because if you do the survey and you don't do anything with the answers, it makes things worse because people are like, I took the time now they,

what I want, and now they're just ignoring me, you know? So you have to be cautious. If you're doing a survey, you have to be ready to respond to whatever people's answers are. It's such great advice. And the there's also the old adage as a leader, like praise publicly and correct privately. So as you said, a recognition program won't work on its own.

If you have people who are trying to knock people, other people down to their level or trying to publicly embarrass someone. So just think about that in your dealings with other people and how in this and where in the situations you're providing corrective feedback versus providing reinforcement and recognition. Absolutely. And you can just look for opportunities throughout the day. Yeah. I'd say to start with an informal approach,

which is such as making a point to acknowledge the good work and making people feel valued by, by listening attentively when they're speaking. So are you, when, when you're in a conversation with someone, are you putting away distractions, your body language show that you're actually listening, just because you have two years on your head doesn't mean that you're listening. Exactly,

exactly. And that's a really good way to make people feel cared for is when they're speaking pay complete attention to them and listen to what they're saying, you know, just yeah, yeah, yeah. Them, you know, that is so important. Right. And really try to get their concern right. Often if maybe repeating back to them too. Like,

so I hear your concern is, and just making sure that you're on that you're hearing what they're trying to say. Cause sometimes they're concerned can live under another level of what they're actually saying, conscious listening that we always talk about. We'll, we'll help in identifying what, what is the issue that they're, that they're dealing with And even not to interrupt you,

but even asking, what do you think we should do about that? You know, when they're, whenever they're, when they're speaking their concern and truly listening and you're not committing to doing it, but if you, if you hear the, the idea or solution that they have, it, it might lead to rectifying. Whatever's being said, Adding to your point earlier about just not having a recognition program,

but having a part of a bigger picture is, think about when you give feedback on someone's charting, when they're doing, when you're providing some quality assurance notes or QA notes on a, or a flag on a chart, are you only using that as a tool when they did something wrong or patient, or you recognize people for their diligent documentation or, you know,

that was a stroke call. We all say like, time is brain. And you had really great times on that call, that patient made into the, into the CT machine within 20 minutes or 30 minutes of you recognizing it was a stroke and giving a stroke alert. Like these are specific not, Hey, great job, Nick. And, and your feedback about what was so great about that.

And I think that would, that would help as well. But there there's a great phrase. A person who feels appreciated will always do more than what's expected. So here's our invitation to you is take more steps to recognize people in our book, making good of the order of the best part of your meetings. There's an exercise about acknowledging others. It's on page 28.

If you have the paperback or it's also exercise number 12, if you have the digital version. So you can find copies of information about that book at, let me just bring up@emsleadershipacademy.com forward slash go to book and I will put a link up there. So thanks again for joining us today. And we hope you enjoyed this session of our weekly Q and a.

If you have questions to submit, you can send them to support@emsleadershipacademy.com or you can leave us a voicemail, (888) 330-8288. 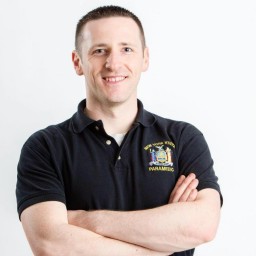 Robbie is the cofounder of the EMS Leadership Academy, host of the EMS Leadership Summit, and paramedic captain in Albany, NY where he serves in the Special Operations Division for ground rescue, flight, & tactical medicine. He performs international medical flights with North America's largest fixed wing Air Ambulance service. For more than 14 years, Robbie served as President of a non-profit EMS organization advocating for increased funding and raising the bar of excellence. In addition, Robbie is an American Heart Association advocate who is passionate about empowering others to save more lives. He has taught physicians, nurses, and other medical providers Advanced Cardiac Life Support at medical schools and hospitals throughout Manhattan. Robbie has undergraduate degree from Rensselaer Polytechnic Institute, and a MBA from Case Western Reserve University and provides business consulting that combines his love of technology with healthcare.